The third book in my series PAWS for Romance is available now! The title is Healing Two Hearts: A Valentine’s Day Romance. It’s exclusively on Amazon and also included for Kindle Unlimited subscribers! ~ Kadee

Can love be just as lovely…the second time around?

Cardiac care nurse Tricia Alderson was heartbroken when she lost her workaholic husband five years ago. She’s now helping her brother and sister-in-law plan a Valentine’s Day vow renewal ceremony and she’s also happy to see two of her nieces in loving relationships. But Tricia believes that new romance is for younger people and she has no expectations of finding love for herself again.

Rone Malloy’s stressful management job in radio ad sales lands him in Tricia’s CCU on New Year’s Eve. Headstrong, and refusing to take his health issues seriously at first, he’s told he’ll have to change his ways or risk another attack, possibly even a fatal one. But old habits can be hard to break.

Rone really wants to see more of Tricia, the pretty nurse with the lovely blue eyes. When he’s offered a promotion that could bring even more stress into his life, will he accept it? And, if he does, after losing one man she loved to workaholism, will Tricia risk her heart a second time?

Author’s Promise: This is a heartwarming, contemporary romance with a “happily-ever-after” ending. It’s a clean story with nothing more than hugs and sweet kisses.

Healing Two Hearts: A Valentine’s Day Romance is novella-length, and book #3 in the sweet and clean contemporary small-town romance series, PAWS for Romance. Click here to check it out now on Amazon!

Christmas Actually is all around ~ 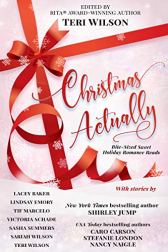 Join eleven best-selling and award-winning authors under the mistletoe as they share bite-sized holiday romances celebrating the joy and romcom sweetness of the Christmas season!

The Christmas Wedding Date by Shirley Jump
When Holly McDaniels gets roped into attending her hometown Christmas ball, she convinces her handsome neighbor, workaholic Nick Corvino, to play the part of husband, giving the bah humbug bachelor a taste of Christmas magic that just might lead to a very real holiday happy-ever-after.

Gingerbread and Jingle Bells by Caro Carson
A big-city businesswoman answers her grandma’s plea for holiday-rush help at the family bakery, only to find herself apologizing to the small town’s handsome veterinarian each time she thwarts her grandma’s matchmaking schemes—until she discovers the mastermind behind all the romantic plans wasn’t her grandma, after all.

A Merry Aussie Christmas by Stefanie London
Their relationship is so fake it comes with costumes… Will spending a whole month as Patterson’s Bluff’s official Mr. and Mrs. Claus give a golden girl and the town outcast a second chance at love?

Mission: Merry Christmas by Nancy Naigle
A physical therapist finds her client bah-humbugging the Christmas spirit out of everyone and decides to focus on getting him back on the nice list.

Christmas In Sweetland by Lacey Baker
A restless hometown girl strikes a deal with the uptight guy next door to win a neighborhood holiday decorating contest—but they’ll both need a little Christmas magic to survive missing cupcakes, broken twinkle lights and falling in love.

Christmas Eve at the USO by Tif Marcelo
When former college sweethearts and Army soldiers reunite at the Dallas Airport USO during a Christmas Eve snowstorm, they try to ignore the love they lost—until the Christmas spirit decides to play Cupid, leaving them with no choice but to go after the love wished they still had.

A Midnight Clear by Victoria Schade
A dog sitter booked to spend the Christmas holiday caring for a client’s new puppy is surprised to discover that an approaching snowstorm has trapped her with the handsome man of the house.

Love Letters for Christmas by Sasha Summers
When a soldier decides it’s time to meet his long-time teacher pen pal, his visit to her classroom brings all sort of surprises—and might just give them their greatest Christmas gift ever: love.

A Snow Maiden for Christmas by Sariah Wilson
Christina and Jack were high school sweethearts until he left her behind to follow his dreams. Now he’s back and their meddling mothers are determined to give Christina and Jack’s former romance a second chance by forcing them to play roles opposite one another in their local winter festival.

A Merry Royal Layover by Teri Wilson
When a veterinarian traveling to a remote European village to volunteer at an animal shelter during the Christmas holidays gets an unexpected first-class upgrade, she meets a charming stranger in the airport lounge who may or may not be the country’s crown prince.

He never thought he’d have a real family Christmas…

For the past eight years, Bill Smith has been unable to set down roots. But he never forgot the magical night he spent with an auburn-haired beauty in Last Stand, Texas. When she finally tracked him down, he was more than happy to donate a kidney to AJ, the son he never knew he had. But now that AJ is better, Bill wants more time with him and his mother. He wants a family.

Annie Burleson can’t help but be grateful to this almost-stranger for saving AJ’s life. Still, she’s a little wary. AJ has already been through so much—what if Bill leaves again? And with Christmas in full swing, it’s difficult to discern which emotions are festive and which are forever.

As Annie and Bill’s lives collide, their mutual love for AJ makes this more than a marriage of convenience. But is it enough to give them the family Christmas they all deserve?

That night after the fishing expedition, Bill found himself lying awake, staring at the ceiling and thinking about the boy’s request for a brother. It was a natural thing for a child to ask about, but he himself had managed to push all thoughts of sex with Annie deep to the back of his mind. Now that he allowed the idea to bloom in his head, the memories of their one time together, all those years ago, came flooding through him.

This time he let himself remember everything: the silk of her skin, the scent of her hair, the plaintive sounds she made as he touched her. The way she had moved beneath him, welcomed him inside her. The more he let himself remember, the worse his body ached. Then Lucky began to snore, two beds away, and Bill knew all possibility of sleep was gone.

He stood up and took his jeans from the chair beside the bed, pulled them on, and put on his boots and jacket. Then he quietly made his way to the door. Outside, the Texas sky was black and clear and lit with a million stars. The land rolled, dark and mysterious, for more miles than he could see. Up on the ridge, a coyote began to sing, the eerie notes quivering as they echoed against the barn. He shivered. He knew how that coyote felt. He’d been alone for a good part of his life. But now he had the chance for something different. He had a son. And next Saturday he’d have a wife, too, if in name only.

Is that what he wanted?

ies and the stories became books. I began writing my own stories before I even started school, and won my first writing contest at the age of nine. It’s always been my dream to be a published author. The road was a long and twisting one, but I finally made it. I’m proud to be a two-time Golden Heart finalist, and several of my stories have been Amazon best sellers.

The second book in my series PAWS for Romance is available now! The title is Catering to Love. It’ll be exclusively on Amazon and also included for Kindle Unlimited subscribers! ~ Kadee

PAWS for Romance #2: Catering to Love

A beautiful chef has perfected at least a thousand recipes, but will she and her handsome martial arts instructor find the right ingredients when they begin Catering to Love?

It takes confidence to launch a new catering company, but Chef Amber Pearson is fresh out, thanks to her cheating ex-husband. Her brother’s suggestion that she sign up for a self-defense class seems like a great idea to help her re-build her self-esteem. It’s only a few hours a week and there’s no commitment … she’s definitely not ready for any sort of commitment.

Luis Mendoza is faced with a dilemma when his high school crush walks into his martial arts studio on Town Square. He came home to help his family after his father’s untimely death and to start his own business, which means he needs to stay sharp and focused. Feeling like a nerdy seventeen-year-old again every time Amber shows up for class definitely doesn’t fit in with his plans.

Will Amber be able to learn to trust and love again? And, as they get closer, can Luis stop worrying that she isn’t really over her ex, or that he could show up at any time to try to win her back?

Catering to Love is book #2 in the clean contemporary romance series, PAWS for Romance. Click here to check it out now on Amazon!

The first book in my new series PAWS for Romance is available now. The title is Rescuing the Single Dad. It’s exclusively on Amazon and also included for Kindle Unlimited subscribers! Please check it out today…thanks! ~ Kadee

Will Erin and Jason find their “forever homes” in each other’s hearts?

As the director of PAWS, the “Pearson Animal Welfare Society,” Erin Pearson stays busy helping stray and surrendered pets find the “forever homes” they deserve. The small-town animal shelter was the life’s work of her beloved grandmother, but when a million-dollar donation to a new building project is embezzled, Erin fears the scandal will be the end of PAWS.

The drive up from San Antonio to the beautiful Texas Hill County to adopt a dog for his daughter is no more than an inconvenience for financial advisor and single dad, Jason Blaine. That is, until he meets the lovely director of PAWS. When Erin later asks for his help in tracking down the consultant who made off with the donation, Jason couldn’t say no even if he wanted to. Erin is warm and approachable… everything his late wife Valerie wasn’t. But Jason is sure that Valerie’s wealthy parents won’t hesitate to sue for custody of their granddaughter if he starts dating again and not devoting every spare minute to being a dad.

Will Erin and Jason track down the missing million in time to save PAWS and her family’s good name? Caught between the fear of losing his little girl and the hope of a promising new romance, will Jason allow Erin to rescue him, too, even though he only has two legs instead of four?

Rescuing the Single Dad is book #1 in the clean contemporary romance series, PAWS for Romance. Book #2, Catering to Love is coming soon.